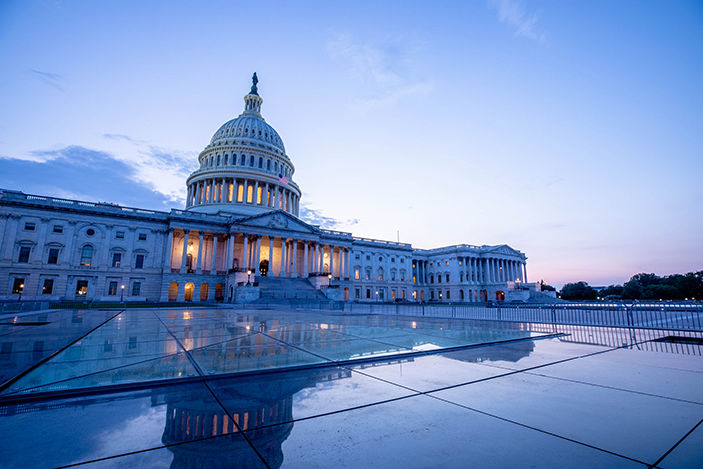 420 Day: When Will Cannabis Be Federally Legal?

It’s been a long, hard fight for the federal legalization of cannabis in the U.S. While recent bills have been put forward by major politicians to do just that, it will likely be a while before one can break through and become law.

Most recently, the U.S. House of Representatives has approved a bill that would remove cannabis from the list of scheduled substances — decriminalizing it across the country. It’s called the Marijuana Opportunity Reinvestment and Expungement Act, or MORE Act.

Cannabis is currently a Schedule I drug under the Controlled Substances Act, meaning the U.S. government believes it has no medical use and a high potential for abuse.

The bill wouldn’t legalize the drug in the same way many states have. It wouldn’t create a process for establishing pot shops or set up a federal agency to regulate cannabis products. But it would clear the way for states to do that themselves, without the threat of selling an illegal product hanging over their heads.

The MORE Act would also slap a federal tax on cannabis products, expunge the criminal records of many people convicted of weed-related crimes, and clear up conflicts between state and federal laws when it comes to regulating cannabis.
As 420 Day approaches, that bill will head to the Senate, where it’ll face a much tougher road.

The bill could languish for a long time before it’s considered by the Senate. But the more likely outcome is that the Senate refuses to consider it at all.

This has happened before, in 2020, when the House voted to decriminalize cannabis. The Senate wouldn’t even think about it.

That’s because Democrats need 60 Senate votes to make a filibuster impossible. And they probably won’t get what they need from the Republicans, since the Democratic bill includes equity programs aimed at helping people of color who have been disproportionately harmed by the war on drugs.
President Joe Biden has promised a more relaxed approach to the regulation of cannabis — treating it less like deadly drugs like heroin and fentanyl.

But Biden himself remains a staunch opponent of cannabis use. His administration has fired five people for admitting to using weed in the past.

His press secretary, Jen Psaki, won’t even say whether Biden supports the MORE Act, though she said he believes the laws need to change.

As 420 Day approaches, it’s impossible to say when the U.S. will legalize cannabis federally. But if public opinion is anything to go on, the day when federal legal weed is a reality could come sooner rather than later.

A Pew Research poll conducted last year found an overwhelming majority — 91% — of U.S. adult respondents said cannabis should be legal. A full 60% said people should be able to use it for medical and recreational purposes, while another 31% said weed should only be legal for medical use. Just 8% said it should not be legal in the U.S.

But support isn’t universal. As mentioned before, age is a huge factor in whether or not someone is likely to support legalizing weed. While younger Americans are all for it, baby boomers still have their doubts. And for right now, at least, that group is overrepresented in the halls of power in the States.

That Pew poll found that 70% of those aged 18–29 agreed that weed should be legal for medical and recreational use, while just 46% of those 65 and up agreed.

Keep in mind that the Senate skews older — there are 11 senators above the age of 75, which is the least likely group to support legalizing recreational and medical week. According to the Pew study, just 32% of that group is on board.
And politicians’ responses to the idea are still largely drawn along party lines.

The Marijuana Moment newsletter has recently rounded up the latest statements and tweets from U.S. politicians on the subject. Most Republicans said they wouldn’t support cannabis legalization. Democrats are more open, though quite a few still oppose legalization or won’t give their opinion outright.

Without federal legal cannabis, many states have already legalized recreational or medicinal cannabis use for adults.
Recreational weed is legal in the following states and territories, where those 21 and up can currently — or soon will be able to — buy it in specialized stores, similar to alcohol:

The following states have a more “it’s complicated” relationship with cannabis. Some have decriminalized it, but don’t allow it to be sold in stores like more relaxed states. Others have approved it for medical use only. A few states allow CBD products — which don’t contain any of the intoxicating THC found in cannabis and are used primarily for relaxation or medicinal purposes:

The states that have legalized and regulated cannabis are seeing major new tax revenues, which they can use to fund any number of programs or pay down debt. Cannabis sales hit $25 billion in 2021. Some Wall Street experts think legal cannabis could be a $100 billion industry by 2030.

Even a governor who says she’s never used weed, New Mexico’s Michelle Lujan Grisham, is excited about the economic opportunity for her state.

But not every state’s leadership is happy about the prospect. Texas, which lies just across the border from newly-legal New Mexico, has said it will continue to enforce its cannabis laws if anyone is caught walking across the border with weed.

When it Happens, AdaptiveHR Can Help

It seems inevitable that cannabis will eventually be legal federally in the U.S. — even if it takes a few years. State after state is making its own laws. And our closest ally, Canada, legalized it in 2018.

But legislation is complex, and there will likely be serious penalties for businesses that make mistakes. We know this because, in places where cannabis is legal, business owners can face substantial fines or even go to prison for selling weed in a way that doesn’t comply with the state’s rules.

AdaptiveHR can help cannabis businesses avoid these problems by navigating legislation to meet their needs.
We provide a fully-integrated and customized solution for risk management — as well as payroll, human resources, employee benefits, and 401k retirement solutions. All of these services can scale easily for future growth.
We keep track of the ever-changing landscape of state and federal regulations, so cannabis businesses don’t have to. In a field where one slip-up can devastate a company, it’s important to have a trusted partner. Our services include:

That means one single, dedicated partner — with deep industry experience, cutting-edge technology, and world-class service — for all the headache-inducing parts of running a cannabis company.

Reach out to schedule a consultation today to learn how your cannabis business can benefit from AdaptiveHR.

Americans overwhelmingly say marijuana should be legal for recreational or medical use. (April 2021). Pew Research Center.